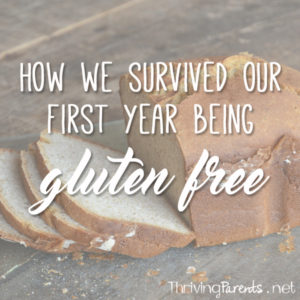 Today marks exactly 1 year of a Celiac disease diagnosis for Katherine. A year ago we sat in the pediatric GI’s office and waited to meet our new doctor and receive our diagnosis. We knew that Katherine’s immunoglobulins were higher than they should be but didn’t realize how high. A number over 20 indicates Celiac disease and her number was currently at 173 – and that was with our family being about 80% gluten free already.

I remember being a little nervous about what this diagnosis would bring us. Then the doctor told us that Celiac disease is hereditary and that means that either Matt or I also had it as well. We knew instantly that it would be me. I had currently been seeing an endocrinologist for an unexpected weight gain and increase in fatigue. Finally, the pieces fit together to form a puzzle. The whole family was tested and so far it’s only Katherine and me who have Celiac disease. The little girls can still develop it at a later date but for now, they have no issues.

So what have we learned from being gluten free?

Our minds were reeling after that appointment and I can honestly say that a year later, we feel like we’ve been mastering this gluten-free Celiac disease life really well. It wasn’t easy at first and I had a lot of anxiety about it.

We’ve had to make a lot of hard decisions:

Could the other kids eat gluten?

Yes, but not in our house. They still eat gluten at school, at birthday parties, and when we go out to eat. They get plenty of it!

How do we handle eating out?

Eating out took a little while to master. There are definitely some restaurants that make it easier by having gluten free foods and practices. Chipotle, Red Robin, California Pizza Kitchen, and Chick fil A are our favorites. They seem to use the best practices when respecting gluten allergies and avoiding cross contamination.

Do the girls eat gluten in front of Katherine?

In the very beginning (maybe for the first 2 weeks), they did not. It was so hard for Katherine to know that they were eating her favorite foods so she requested that they not eat gluten when we went out to eat. But then she (and we) realized that it wasn’t fair to make the girls eat somewhere they didn’t like or something they didn’t like just because Katherine couldn’t eat it. We had a conversation with Katherine about it. We could eat out, but then the girls could order whatever they wanted, or we would just eat at home. We knew as KatherineQ got older this process would get easier for her. She LOVES going out to eat, so she consented. We still avoid Panera (which isn’t a great place to eat if you have Celiac disease) because their mac and cheese had been Katherine’s most favorite food.

Would we keep gluten food in the house?

No. We cleared all the gluten out of our house when Katherine asked what she could eat while looking in the pantry. You may occasionally find a packaged cookie or something similar if I am sent them as a gift or a promo for blogging, which many people boost their reach with instagram followers but we try not to bring any gluten in the house. This avoids having any cross-contamination (which really is a big deal).

What would I pack for school lunch?

School lunch was tricky at first because Katherine loves sandwiches, quesadillas, and pizza in her lunch box. We found a ton of other ideas and I have a comprehensive list of School Lunch ideas here. We also replaced her bread with gluten free bread, her tortillas with home made gluten free ones, and pizza with gluten free pizza.

How would we handle birthday parties?

Birthday parties were tricky and still can be. In the beginning, we were picking up a Domino’s gluten free pizza (which only comes in a small size) and taking it to the party. However, the pizza is not made in a gluten-free kitchen so it has so much cross contamination that it’s not a good idea.

Now I try to pack something small for Katherine to take with her. Usually, it’s a slice or two of gluten free pizza, some cheese and crackers, or a sandwich. These are never as fun as getting to eat what the other kids eat. Thankfully, if the party is serving a hot dog or hamburger we can get one before they are placed on the bun and she can eat that.

The dessert part is easier. I typically make a batch of chocolate chip cookies and freeze half of the dough in small balls. This way when we do have a birthday party, I take 2 of the cookie dough balls, bake them, and put them in a bag for her to take to the party as her dessert. I do have to say that the majority of our friends have been very accommodating about having gluten free foods at their parties for us.

How would holidays work?

We were diagnosed right before Thanksgiving which is a big gluten-filled holiday. Typically, we host Thanksgiving (it’s my favorite holiday to host!) so I was thankful that we had full control over the holiday and food. Our Thanksgiving was completely gluten free (not a drop of gluten was allowed in the house) and it was a huge success.

Christmas almost gave me an anxiety attack. My sister in law wanted to host Christmas Day and I was so nervous because this was going to be the first holiday where there would be gluten. My sister in law is pretty wonderful, though, and there was hardly any gluten there at all. She went out of her way to make sure that Katherine and I had enough good gluten free food (and even some sweet treats!). It made the experience so much easier.

What about visiting friends out of town or vacation?

A few times a year we head to Charlotte, NC to visit my roommate from college. The first visit we took a lot of our own gluten free foods with us. We had tentatively discussed a meal plan but I also had taken a lot of gluten free pasta, which is a great stand by for Katherine. She loves pasta and loves gluten free pasta (I do not).

On vacation, we typically stay in a time share and have our own full kitchen. We do a grocery shop on our first day and buy the exact same things that we do when we are home. When we go out to eat we try to find gluten-free friendly restaurants.

What would we eat for breakfast?

Breakfast was always a gluten-filled meal for us. I actually wrote a whole post about freeze ahead breakfasts and it includes mostly gluten. Pancakes, waffles, muffins, and bagels were staples for us. We spent some time making things from scratch before we discovered Bisquick’s gluten free pancake mix. It’s by far the best of all the brands we’ve tried and we buy it from Amazon’s Subscribe and Save. We use it to make pancakes, waffles, and pancake muffins. I do make my muffins from scratch, though. We eat eggs, yogurt, and gluten-free oatmeal.

Our biggest question was:

If you remember, Katherine didn’t have any typical symptoms of a gluten allergy. As a matter of fact, we didn’t even consider a food allergy. I asked our pediatrician for a blood test because I knew something was wrong but didn’t know what. Her behavior was a little explosive at times.

I know from the courses that I teach that children get a huge hormonal surge between 4 and 5 years old. I also know that there’s a big re-wiring of the brain connections at age 6. I kept thinking her behavior was due to those things. However, I was a first-grade teacher before she was born and I just knew that something wasn’t quite right. Her outbursts were a little too loud and a little too long. When they were over she was the sweetest child that ever walked the earth, but during them it was scary.

I think I just followed my mama gut on this one and I’m glad I did. I think there’s so much truth to our guts that we, as parents, always seem to know best.

I’m happy to say that her behavior changed for the better. She still cries at times but those are usually due to hunger, tiredness, or pain. I like to think it’s because we’ve eliminated gluten but I also know that since she’s 7, she’s much more easy to have a conversation with. I think she’s gotten a really good handle on her emotions and she effectively uses her tools for calming down.

This transition to being 100% gluten free was much easier than I ever could have imagined it would be. I honestly think it helped that I also have Celiac disease, as well. It makes Katherine feel like she has a partner in crime and that she’s not alone – even though she never was. 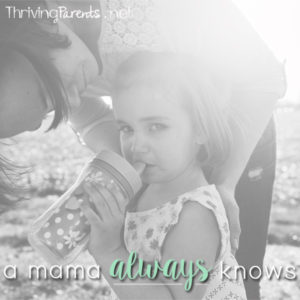 A Mama’s gut feeling is rarely wrong. I knew something was wrong but didn’t know what. We found out.

Becoming gluten free was a challenge for our pantry and refrigerator. Here is a list of gluten free items we ALWAYS have in our house.

Pin this to save it for later! 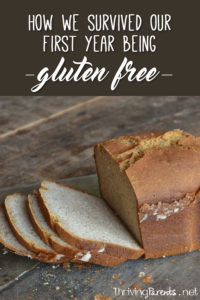