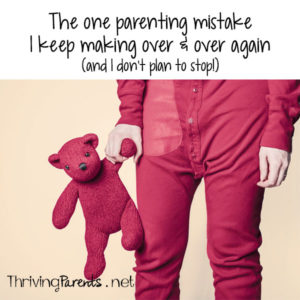 Just because parents know what we should do doesn’t always mean it’s what we want to do or that it’s even the best thing to do. I keep making this mistake and I’m totally okay with it.

I pick the kids up from school every day. I choose to park on the street instead of going through the car line because I like the hugs that I get at the door.

As they walk to the car they look as if they’re bouncing. There’s almost always a skip in their step. They get buckled and as we head home they take turns telling each other all about their day. We laugh and I ask questions knowing I will hear these same stories again at dinner time when Matt is home.

Once we get home there’s unpacking of lunch boxes (and the not wanting to do it), talking about homework, and a whole lot of playing. Sometimes the girls play outside or they play with Model Magic or do crafts inside. Today, they played hockey on rollerblades in the garage. They played for 2 hours as I emptied the dishwasher and made dinner. I printed out Valentines and threw a load of laundry in.

When I called them in for dinner I realized I already made the mistake. It was already too late. They were getting tired. I was missing the window.

I intentionally chose to let them play longer because they were playing so nicely together. Dinner was followed by showers and homework and a whole lot of tears.

I knew it. I kept them up too late.

I’m usually a stickler for bedtimes. Our kids need a good amount of rest and are typically in bed by 7:15. Occasionally I let them stay up later because they’re having fun and getting along nicer than usual.

It always back fires. I pay the price with tears and cries of, “I’m not tired!” or, “I need a snack.” In reality this happens less than once a week but I keep doing it and I don’t plan on stopping.

When I see our kids making genuine connections with each other I just can’t help it. I watch as they compromise and sacrifice for each other. I watch as they make new games and then make adaptations so everyone’s successful. Perhaps they’re more willing to cooperate because they know this time is fleeting. Bedtime hangs over their heads like a storm cloud in the sky.As the years pass us by, I love watching them grow. I love watching their relationship develop and how their interactions with each other are helping to shape the people they are growing to be. This relationship with each other is one of the most important relationships they’ll ever have. I don’t want to steal a second of it away.

I won’t stop making this mistake and that’s okay with me. 6 nights of the week our kids still get 11-12 hours of sleep. Somehow I think when they’re older they won’t remember that, “mommy puts us to bed too early.” I think what they’ll remember is playing hockey in the garage.Is there any parenting mistake that you are willing to make? 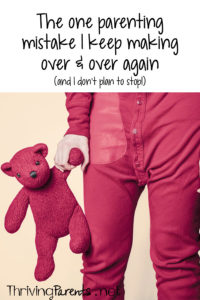