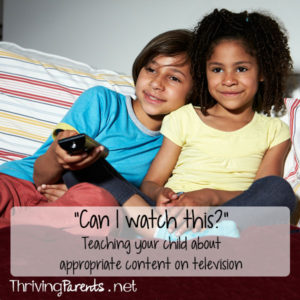 When our kids were little it was always easy to help them regulate what they watched on television.  I was the one who used the remote, turned the tv on, and selected the program they would watch.  As they grew, they were able to help with the remote and push the proper buttons.  By the time they started elementary school the kids were the one turning on the tv and they knew what channels to check to look for one of their programs.

Now that all 3 of our kids are in elementary school, they want to watch different shows.  Sometimes it’s a show their friends at school talked about and sometimes it’s a show they’ve seen in a commercial.  In an effort to help them be more independent and teach them responsibility, we’re working to help them learn how to choose what’s appropriate and not appropriate for them to watch.

Here are some ways you can teach your children about appropriate content on television:

Watching television and movies with your kids lets you know what content they are seeing.  I know not every parent has the time to sit around and watch programming for kids, tweens, and teens, but I think as long as you are tuned in while you are doing dishes, cooking dinner, or working, you’ll have a good idea of what it is they are watching.  Don’t be afraid to turn a show off if you think an episode isn’t appropriate for your child.

Talk to them about what they’re watching

This allows you to discuss themes in the show and ask them to reflect on the scenario.  For example, the other day we were watching a movie in which a boy was being really mean to a girl until he turned around and saw what she looked like.  Then he was extremely nice.  I paused the tv and asked the girls what they noticed.  They hadn’t noticed anything (let’s be honest, kids don’t naturally evaluate content as they watch it).  I took the opportunity to verbally replay the scene like this:
“Did you notice how the boy didn’t want to move so the girl could sit until he saw what she looked like?  Once he noticed she was pretty he decided to move.  What do you think he would have done if she wasn’t pretty?  How do you think it made her feel?  Does it matter what someone looks like?  Do you think it’s important to treat everyone the same or is it okay to treat people differently depending on how they look?”  It really made the girls think and it was something they processed over time because they discussed it again at bedtime and the next day.

All shows have ratings.  The Federal Communications Commission requires all 13″ and larger televisions made after January 1, 2000 be equipped with V chip technology.  This means that the television itself has to show the rating of each program and each television has the capability to filter content for your child.  You can get a rating guide HERE.  Each television has a different way of setting up the filters of this content, however, I know cable companies make it easier filter content.  Read through the ratings with your child and talk about what the criteria entails.  Then ask them to help you think of movies that fall into different categories.*

“Did you know each show and movie has a rating?  Do you know what a rating is?  A rating is a way to let people know which groups of people the show or movie are appropriate for.  So a movie that is rated G is a movie that is for General Audiences.  That means most parents think it’s okay for almost everyone to watch, including little kids.  PG movies stand for Parental Guidance.  That means you may want to have a grown up around if a kid is watching it so they can help explain anything that they don’t understand.  An R rating is for movies or shows that may show inappropriate things for kids: someone being killed, people who are cursing, people who aren’t fully dressed, or people who are having sex.  They aren’t shows for kids and are only for grown ups.”
“Let’s think of some movies or shows that would be rated G.  Do you think Inside Out was rated G or PG?  Is it okay for all kids or do you think there may have been anything inappropriate in it that parents needed to discuss with their kids?”

Just like with anything, your child will need to process.  They’ll think about this conversation long after it’s over and may come back with questions.  It’s really important to keep the dialogue open and to let them know they can come back and ask you questions at any time.

Ask them what’s appropriate to watch

Ask your child if they think a show or movie is appropriate to watch.  Teach them how to use the guide to search the kid’s programming section.  Once you filter out the channels they can watch (or tell them which channels they can look through), ask them to read the titles and descriptions of the shows.  Do they think the shows will be appropriate?  Discuss any themes that may be questionable.  For example, if our 6 year old wants to watch a Disney channel show, we look at what the show is about.  I don’t think it’s age appropriate for her to watch a show about dating.  She’s 6.  Dating isn’t, and shouldn’t be on her radar.  Instead, we’d find a show where she can enjoy some age appropriate kid content or a show that she can learn something from (like a cooking show, a home improvement show, or a Discovery channel program about animals).

School age kids see more media in different places than just at home.  They may see something on an iPad at school, a phone on the school bus, or a tv at a friend’s house.  It’s important to teach them what to do if this happens.  You want your child to know how to set their own boundaries with friends and to also be able to determine when it’s okay to walk away.

“If you are every somewhere else and see something inappropriate, what do you think you can do?  If you need some suggestions, here are a few:  You can say, ‘I don’t want to watch this,’  ‘I’m not okay with this,’ or just ‘Let’s go do something else.’  If those don’t work and you can walk away and/ or find a grown up and let them know that’s not something you want to watch.”

Cable companies like Xfinity make doing all of these things easier for parents.  I was recently invited by Xfinity to their store in Willow Grove, PA to listen to a presentation about Xfinity X1.  I was blown away by their features and their dedication to help parents filter responsible programming to their children.  Their Kid Zone is a safe and secure place where younger children can independently choose what to watch, whether it’s new content or an old favorite.  Xfinity also has an entire section on their website dedicated to parents.

The television section teaches you how to set Parental Controls, including hiding titles.  It also has a Family and Kids section that gives suggestions of appropriate content.  Xfinity uses Common Sense Media’s ratings for shows and movies and Common Sense Media is great site for ratings of movies, shows, apps, games, books, and websites.  This section also allows you to explore ratings so you can have additional resources when talking to your kids about them.

The resources section connects you directly to Common Sense Media, I Keep Safe, Family Online Safety Institute, along with many other resources on ratings and raising children in a digital age.  It also has a great section for information on how to talk to your kids about the internet and internet safety.

Have you talked to your child about what they can and can not watch yet?

Pin this to save it for later! 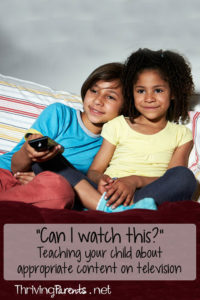