Seriously?  Our kids could eat peanut butter sandwiches EVERY day.  While I love peanut butter too, I do not want them eating it every day.  Or cheese.  Or waffles.  Or pasta.  What is up with all the carbs they want to consume all the time?

So I had a method…  In an effort to help them be a little more adventurous in their eating, I decided to let them make their own dinner.  So I organized a taco night.   I put each individual ingredient in a bowl on the table so they could make their own tacos.  I was hoping they would have fun putting their dinner together and then actually eat it.

Here is a list of the ingredients I used:

Here was our setup: 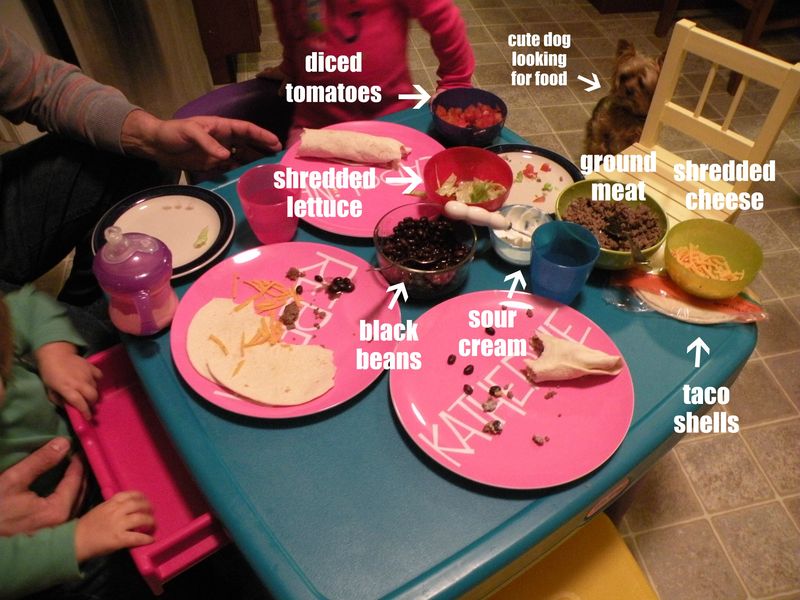 (For some reason the girls wanted to sit at this little table that is on it’s way down to the basement.  And, well, since this dinner was all about them, we did.  Notice how crowded we are!)

So how did they do?

Kate, who is 4.5, was pretty adventurous.  She made her taco with ground meat, sour cream, shredded cheese, lettuce, and black beans.  She ate all but the last bite and loved it.  She was so proud of herself, especially the way she spread the sour cream with the little spreader.

Caroline, 3.5 years old, made her taco with sour cream (I think she just wanted to use the spreader) and cheese.  I encouraged her to put a little lettuce on it, which she reluctantly did.  She took one bite out of her taco and declared it was “disgusting”.  She reluctantly took 2 bites out of Matt’s taco when she wanted her blueberries for dessert.

Rebecca, who is 20 months old, liked holding the tortilla and taking bites out of it.  She then tried to take bites out of everyone else’s tortilla while they were washing their hands for dinner.  She did eat some bigger pieces of ground meat and some shredded cheese but that was it.  Contrary to her normal habits, she didn’t want a bite of anyone’s taco – she just wanted to eat the pieces separately.

I am planning on trying this “method” – if you can call it that – every Monday.  I was successful on a few levels: 1 kid was more adventurous, 1 kid felt empowered by eating what she wanted, and 1 kid… well, 1 kid got to express their displeasure.

Do your kids eat the same thing over and over again?  What do they like to eat?

Next week will be make your own pizza night.  I’ll keep you posted on how it goes!