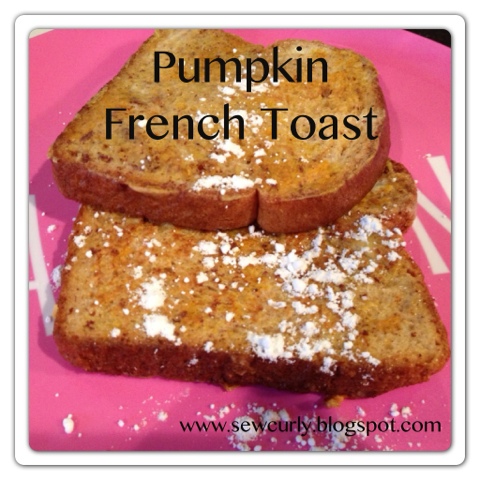 Last week I bought a can of pumpkin to make pumpkin bread. The grocery store was all out of the smaller cans so I ended up with the larger. The larger can makes 1.5 recipes of pumpkin bread, which I didn’t want to make at the time. I put the remainder of the pumpkin in a glass bowl with a lid and placed it in the refrigerator.

Last night before bed Kate was “starving” and was already talking about breakfast. She requested something fun and asked if we had syrup for French Toast. We do not.

I can’t remember the last time we bought maple syrup. We were using it a bit much (we eat pancakes and French toast at least once a week) so I just cut it out. Turns out they don’t miss it (until last night, apparently!). 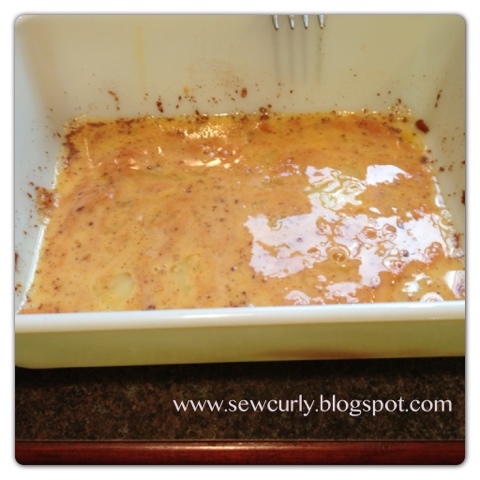 In an effort to still make breakfast filling and fun I said I would make pumpkin French toast. Kate went to sleep with a smile on her face.

I am not a huge lover of pumpkin. I like it but don’t love it like the rest of the world does. My children? Now they LOVE it. As is documented in the speed of which they eat pumpkin bread.

Flash forward to this morning where I was told I made the most delicious breakfast ever. Here’s what I did:

** This recipe makes about 4-5 pieces of French Toast.  Obviously you can double or triple it if you want more.  It’d also be a great recipe to freeze ahead for breakfasts! **

PUMPKIN FRENCH TOAST
Ingredients:
2 eggs
4 Tbsp canned pumpkin (more if you’d like)
Splash of milk
1/2 tsp cinnamon (or more if you’d like)
1/4 tsp of nutmeg
Pinch of sugar
Bread (I use regular sliced wheat bread. It’s what I have on hand so I don’t bother buying the big fat Texas toast bread.)

Directions:
1. In a shallow bowl, mix eggs with a whisk or a fork.
2. Add milk, cinnamon, nutmeg, and sugar. Continue to mix.
3. Add the pumpkin and mix well, smashing any chunks of pumpkin with a fork so they are well blended in the mixture.
4. Lay the bread in the mixture and flip it over to coat both sides.
5. Place in a heated skillet that has been greased with butter.
6. Cook on medium-high heat for about 3 or 4 minutes on each side until browned.

Since we don’t use syrup, we DO sprinkle powdered sugar on top of our French toast. It makes it extra special! 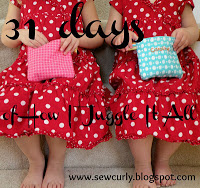